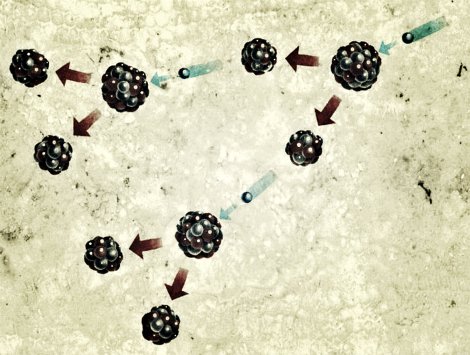 Consider for a moment the physics of an atomic bomb.  The process that leads to the massive explosive force is called nuclear fission.  In order for this reaction to take place, a single atom of a heavy element like Uranium or Plutonium must be split into two lighter elements, which in turn will cause two major effects.  The first is a release of subatomic particles (neutrons) that impact other atoms, causing them to split and trigger a chain reaction. The second is a release of energy that occurs each time an atom of the heavy element is split.  The potency of the bomb depends upon the creation of a chain reaction in which millions, and even billions, of atoms split, release energy, and cause others to split.  When this occurs, the energy of each splitting atom combines to make a massive amount of power and explosive force.

What a great metaphor for Gospel-Centered Discipleship.

Consider the picture of discipleship Paul implements in 2 Timothy 2:1-2:  “You therefore my son, be strong in the grace that is in Christ Jesus and the things you have heard from me in the presence of many witnesses, these entrust to faithful men who will be able to teach others also.”

A simple reading of this passage reveals that Paul understood the massive impact that would result as Timothy (Titus, Luke, and others he discipled) not only grounded himself in the Gospel but also multiplied his efforts by sharing the Gospel with the lost and then raising them up into disciples who would likewise ground themselves in the Gospel, share the good news, and teach others to do the same.

Consider the impact of this simple model of discipleship in comparison to mass evangelism efforts devoid of a strong emphasis on multiplicational discipleship.  In the following chart, the column on the left represents the impact of a person who leads a single person to Christ every day for the rest of his or her life. The column on the right represents the impact of a person who only leads one person to Christ every six months, but then disciples that person and teaches him or her to lead others to Christ and to reach and disciple others at the same pace.

Number of “CONVERTS” (1 converted each day) Number of “DISCIPLES”

It should come as no surprise, then, that when Jesus gave us the Great Commission in Matthew 28:18-20, he did not command his followers to make “converts” or simply stand in pulpits and preach the message of salvation:  He told them to “make disciples.”  In His words, “Go therefore and make disciples of all nations, baptizing them in the name of the Father, Son, and Holy Spirit, and, lo, I am with you always, even to the end of the age.”

Jesus and Paul both knew that emphasizing and implementing Gospel-Centered Discipleship was necessary to cause the kind of chain reaction that would have a worldwide impact of massive potency.

A further study of 2 Timothy would show us  that some of the basic necessary elements of a Gospel-Centered Discipleship include a commitment to the purity of the doctrines of the faith and a commitment to impart and equip future generations of faithful men to become mature and ministering worshippers of God.

When these elements of discipleship are driven by the Holy Spirit, suddenly not only are massive numbers of people coming to saving faith, but also those individuals who come to Christ mature in the Word and in obedience to God and begin to share with others the Gospel message. As another person receives the Good News, he or she is trained and equipped to become a mature and ministering worshipper of God who, in turn, tells another of new life in Christ and then works to equip that individual to become a mature and ministering worshipper of God.  This spiritual multiplication can then change the world.

Perhaps one of the most encouraging aspects of this command to make disciples is the reality that each one of us can be the founding catalyst of many spiritual generations of disciples. Each person’s life has an incalculable potential to impact the world for Jesus Christ.

So How Does This Relate to a Great Commission Resurgence?

Now that we have passed a resolution in favor of a Great Commission Resurgence, it is imperative that we make the adjustments necessary to make maximal impact as a denomination for the kingdom of God.

Here at Southeastern, it is our mission statement that we will seek to glorify the Lord Jesus Christ by equipping students to serve the local church and fulfill the Great Commission.  What better way to fulfill our mission and play a major role in a Great Commission Resurgence than by teaching our students the fundamentals of discipleship and the skills by which they can implement life-on-life discipleship in the local church setting?

Three examples of how we are seeking to implement this at Southeastern are:

1. Facilitating discipleship groups for all our first-year college students that provide a small group environment for these students to be led by a qualified Discipler/Mentor for 2 semesters so they might participate in a personal, discipleship relationship that facilitates personal growth and have the opportunity to learn and practice basic transferable concepts and skills that they, in turn, can pass on to others, who will teach others as well.

2. Developing partnerships with local churches that serve as training and internship centers where our graduate students can learn, practice, and impart discipleship skills in a ministry context.

Making Central That Which Is Central

As a man who entered the Southern Baptist world 11 years ago, and who has consistently grown in conviction and loyalty to the Southern Baptist Convention, I have been shocked at the lack of clarity and commitment to actual life-on-life, person-to-person, woman-to-woman, man-to-man disciple making that results in the kind of world-changing, multiplicational discipleship Paul outlined and Jesus commanded.

Unless and until we learn and put into practice life-on-life training and equipping of mature and ministering worshippers of God in Gospel-Centered Discipleship, we can raise all the money we want, throw all the missionaries at the world we want, and preach all the messages we want, but in the end we will be only making a fraction of the impact that I believe God wants us to make.

On the other hand, if we take serious this one word of the Great Commission – discipleship – then each one of us and this seminary and, most importantly, our local congregations can each become epicenters of the life-shaping, culture-challenging, world-shaking spiritual earthquake that Christianity is meant to be.

Here at Southeastern and male2Man, we are committed to being such agents of change.