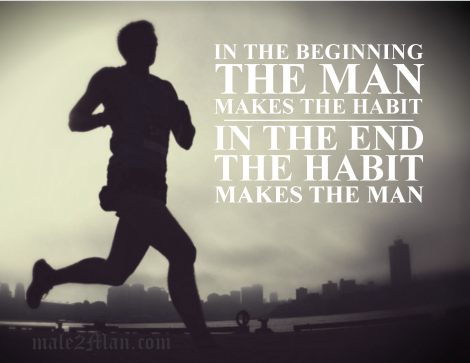 I am not a runner. I grew up playing sports: baseball, soccer, football…anything with a ball. I never considered running around a track to be “fun.” I still don’t.

However, I love to exercise. I enjoy the discipline. I like setting goals. I appreciate the many benefits. And I have found that having a work-out partner is beneficial for a number of reasons. One reason is discipleship. “Iron sharpens iron” (Prov 27.17). So a few years ago, I started running with a guy in my local church. Before I knew it, he had signed me up for a 10K, and I actually enjoyed it. I ran it again the next year, and again the next.

Over the past few years, I’ve been more focused on goal setting. A few weeks ago we posted a message by Mark Driscoll titled “Reverse Engineering Your Life.” His message pushed me to be more intentional to plan annual goals. My goals typically revolve around Zig Ziglar’s “Wheel of Life.” Chris Locurto gives a good explanation of The Wheel here: (http://chrislocurto.com/zig-ziglars-wheel-of-life/). Another great resource from Zig and Tom Ziglar is here: (http://www.borntowinbook.com/BTWFreeResources.asp). This year, I set a new goal for myself: running a marathon.

People have asked me before if I’ve ever run a marathon. “No. Never. No interest whatsoever.” But I turned 40 this year and got a crazy idea: “Why NOT run a marathon as a 40 year-old?” I love biking and have been in a few bike races. The races always pushed me to train harder, eat better, and really focus on the goal, and I knew running a marathon would do the same thing. Well guess who ran his first marathon? The 40 Year-Old (Marathon) Virgin. It became a “bucket list” item, and I have now crossed it off my list. And I’m sure that I will not run another one! I’m done. Mission accomplished!

I’ll be honest—it was brutally difficult. My primary goal was to finish, to simply walk across the finish line. I didn’t set any land speed records. In fact, my time was pretty pathetic. But I finished the race. There were times when I wondered if I might not make it. I consistently had to encourage myself: I’m halfway there. Only 8 miles to go. 6 miles left. Finish strong.

I’m not trying to encourage you to run a marathon. Like I said, I’m not going to do it again. However, Hebrews 12.1 tells us to “run with endurance the race that is set before us.” In his final letter, Paul tells Timothy, “I have fought the good fight, I have run the good race, I have kept the faith” (2 Tim 4.7).

Hear me clearly: I’m not saying that men have to physically run. Can you be a biblical man and not physically run? Yes. But I do think that running is a great analogy for life. I want to be able to stand with Paul at the final finish line and say, “I fought a good fight. I ran a good race.”

Are you “running” a good race? Are you running to win the prize (see 1 Cor 9.24-27)? Or have you given up? As biblical men, I pray we finish well, even when the race gets hard and we feel like quitting.

One of my favorite quotes comes from Teddy Roosevelt. It challenges me to fight the fight and persevere—to be the man in the arena, not a cold and timid soul…

It is not the critic who counts, not the man who points out how the strong man stumbles, or where the doer of deeds could have done them better. The credit belongs to the man in the arena, whose face is marred with dust and sweat and blood, who strives valiantly . . . who knows the great enthusiasms, the great devotions, who spends himself in a worthy cause, who at the best knows in the end the triumph of high achievement, and who at the worst, if he fails, at least fails while daring greatly, so that his place shall never be with those cold and timid souls who neither know victory nor defeat. 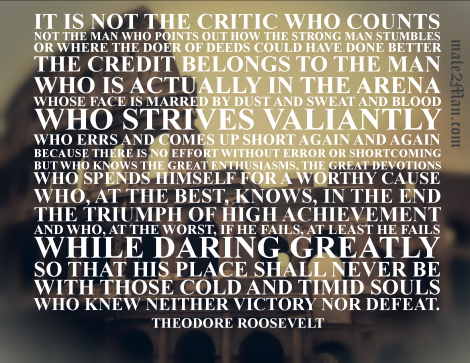 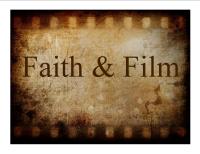